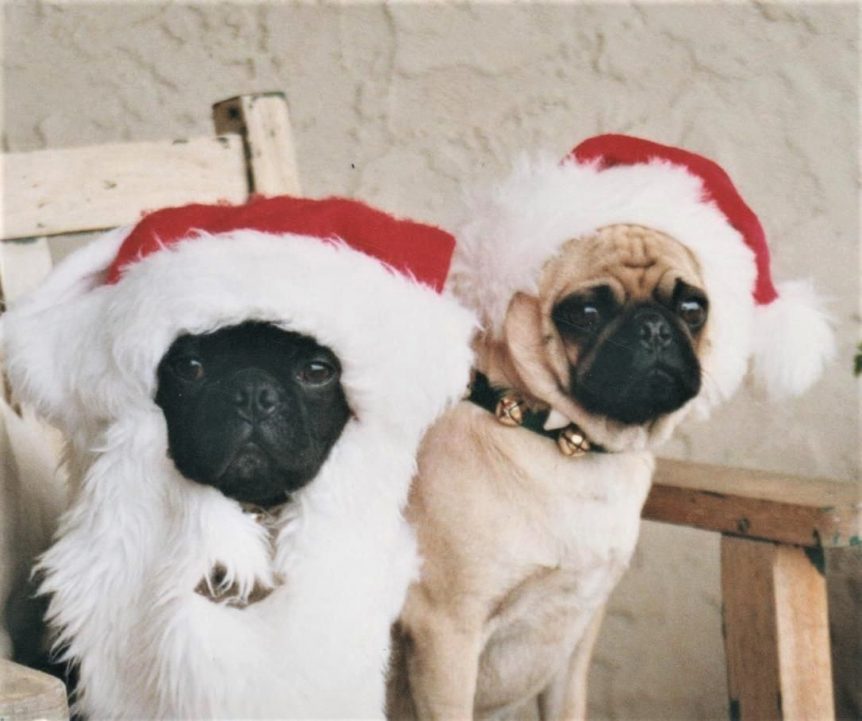 Some of the most cringe-worthy phone calls I receive are those from desperate pet owners describing how their two dogs have, “started fighting out of the blue.”

I cringe because 99.9% of the time, the call comes long after the first dog fight and now, the fights have escalated in both frequency and intensity.

If one dog is in the hospital being treated for combat wounds – or if a person was bitten trying to break up the fight – a piece of my dog-training spirit dies.

Dog housemates fight for a variety of reasons but it’s never, ever out of the blue, or for no reason, or because “she’s protecting me.” I guarantee there are plenty of warnings in dozens of little events leading up to the fight. Trouble is, the messages are delivered in the subtle non-verbal communication of dogs and if you’re not a student of canine body language, you’ll miss them.

Our dog friends laugh at the human notion of “sharing.” To a dog, what’s mine is mine and what’s yours is also mine. So it makes sense that most housemate disputes are due to competition over what we dog trainers call, “high value resources.” Your home is filled with doggie bounty and to Willie and Rex, the following assets are worth defending:

To illustrate this, let me tell you the tale of what we fondly refer to as The Christmas Morning Melee.

It all began so innocently with my misguided attempt to create a Norman Rockwell Christmas… with pugs. 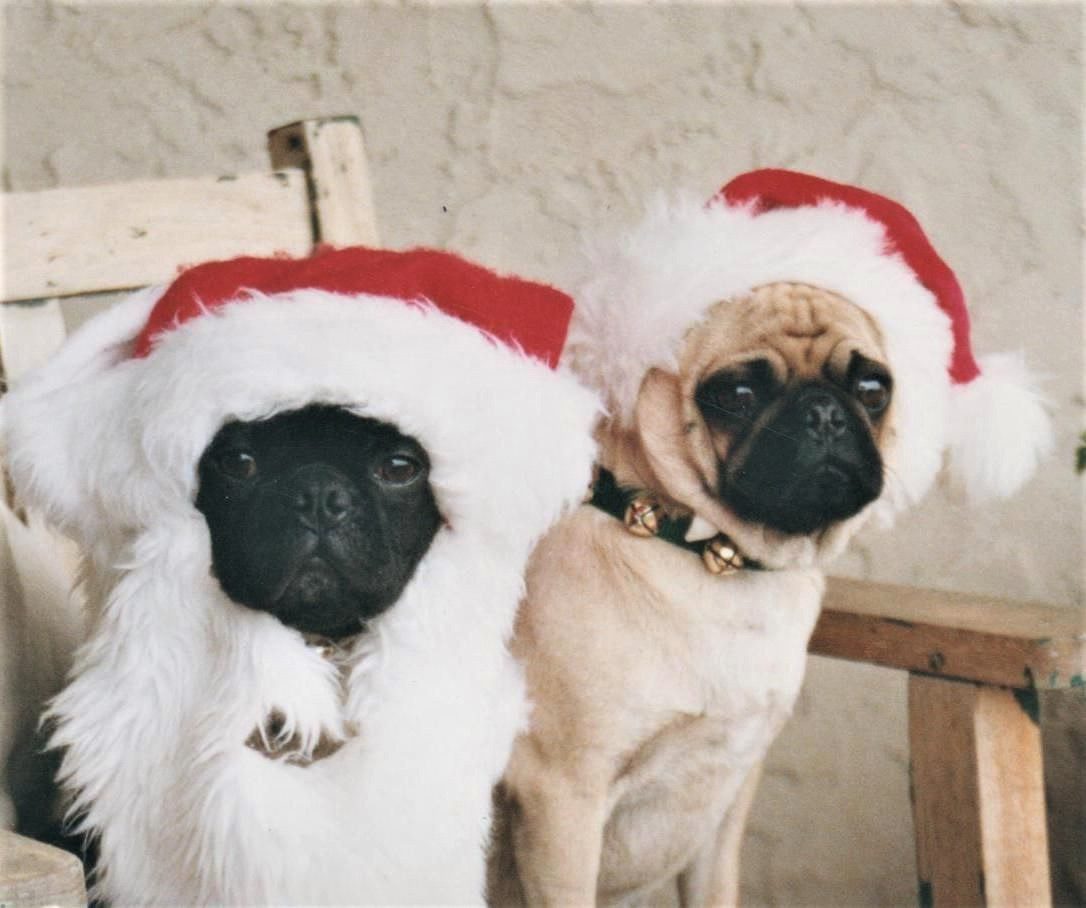 Our friend had come bearing gifts for the dogs. Chaz (pug) and Newt (pug/Boston terrier) had received a four-foot long Christmas stocking stuffed with toys and treats. After some ooing and ahhing, we placed it on top of the other presents under the tree. The stocking was clear plastic so the pugs could see exactly what was in store for them. While the humans enjoyed delicious Christmas brunch, Chaz and Newt monitored the enchanting gift.

Chaz and Newt are the very best of friends. They are constant companions and spend their days lounging on the same bed, each chewing one of their numerous toys. There is rarely a dispute, though occasionally, one pug will attempt a hostile takeover of the other’s toy. If it turns into a pushing contest, complete with low growls, we instantly direct the instigator to a different toy and bed. If that doesn’t work, the troublemaker goes to his crate and we confiscate the toy.

But that’s not how it went down that particular Christmas Day.

When it was time to open the much anticipated presents, Mark and I settled onto the couch, a pug nestled in each lap, the giant Stocking of Plenty spanning the tiny distance between us. Can you count the high-value resources mentioned in that last sentence? I see four, with the stocking ready to explode into twenty-four.

With the benevolent gift-giver looking on, we urged Chaz and Newt to open their present. No encouragement needed. They tore into that stocking like lions on a fresh kill.

The contents were everything they’d imagined. Look, a squeaky squirrel! Tasty snacks! A rawhide bone! A ball! A fuzzy frog! Another ball, with a bell inside…!

Basking in the adorableness of the moment I neglected to notice that Chaz and Newt’s excitement was escalating. I failed to observe that Chaz’s body was doing little “freezes” when Newt pulled an item from the stocking. I didn’t see Chaz shooting hard looks, whites of his eyes showing, at brother Newt. I didn’t catch that Chaz was morphing into Pugzilla.

Suddenly, the gnarlyist pug fight in the history of pugs erupted in our laps. Norman Rockwell turned cage match.

Oh, the squishy-faced, blubbery fury of it all. Pug mythology claims the word “pug” means “face like a fist” and those face-fists were a flyin’.

Mark and I immediately followed Dogfight-in-Your-Lap protocol by standing up and dumping both warriors, along with their trophy, on the floor. The fight only intensified and moved under the coffee table where the sounds of enraged snarly snorters sent visions of lacerations and popped-out eyeballs dancing through my head.

Mark grabbed Newt by the back legs, I did the same with Chaz and we pulled the combatants apart. 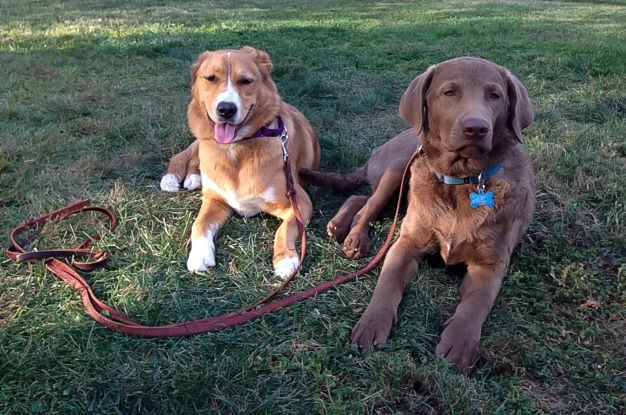 The side-by-side Down-Stay is a terrific way to settle disputes or calm dogs after wild play. It is a gentle reminder the you, dear owner, are their benevolent CEO.

Once separated, the festivities screeched to a halt while the pugilists performed Phase Two of Dogfight protocol – the five minute, side-by-side down-stay.

This is where early training really pays off. When you ask your dog to lie down and stay, he adopts a passive position without force. Despite what you’ve seen on TV, alpha rolls and punishment after a fight only increases acrimony and the very real possibility that you’ll be bitten. The five minute down-stay allows dogs to do something they’ve historically been praised for and gives everyone a chance to catch their breath.

That morning I stood in front of the pugs with arms crossed in quiet authority. Soon, they relaxed and forgot the fight. Peace and glad tidings for all.

We do Christmas differently now. Each dog receives one present to be unwrapped several feet from the others, creating a peaceful defensible space. If things get wonky, one of us can easily step between the dogs to deflect those quick freezes and sideways glances before they become “locked and loaded.”

The gifts are non-consumable and fun, but not knock-your-socks-off incredible. Each dog must keep his own present. No gift swapping or stealing allowed.

As for the Plastic Stocking of Plenty, the next day it was re-gifted to the local shelter for less fortunate dogs to enjoy.

The moral of the story? Harmony equals neutrality and management. I set my pugs up to fail by allowing them to obsess for two hours under the tree, elevating them to the couch, wedging them between two favorite people, and then encouraging them to compete over an amazing gift.

But who can blame me? Norman Rockwell started it.

We are closed each day between NOON & 4 p.m. Closed Sundays and Holidays